Sephardi Voices, like many organizations, has taken the opportunity to reinvent itself through Zoom events. During November and December 2020, we hosted programs with synagogues in Miami (Beth Am and Temple Judea), a Sephardi association (Ottawa, Canada), Limmud (Toronto), and Israeli consulates for Yom Plitim (Toronto and Miami). Thousands who knew nothing about Sephardi Voices tuned in to hear stories of the forgotten exodus. Great thanks to Jimmy Benaudis from Morocco/France, Juliette Glasser from Egypt, Elisa Diane from Algeria/France, Lisette Shashoua from Iraq, and Gracy Kahn Esses and Clemy Srour from Lebanon who generously shared their memories.

The Yom Plitim Zoom events hosted by the Israeli consulates were especially poignant. The consulates reached out to their Jewish communities and many organizations signed on to support Sephardi Voices in remembering and celebrating the heritage of the Sephardi/Mizrahi from Arab lands. Among the many were the Zionist Organization of America, the Jewish National Fund, the American Defamation League, the American Jewish Committee, and Jewish Federations. In Miami, Mayor Tal Ohana of Yerucham, the fourth generation of immigrants from Morocco, was our guest speaker. She was welcomed by Mayor Daniella Levine Cava, the newly elected mayor of Miami-Dade County.

We are optimistic that Sephardi Voices will continue to partner with Israeli consulates, synagogues, and organizations in hosting Zoom events for 2021. We are also optimistic that as vaccines become available, Sephardi Voices will return to provide face to face programs and conducting interviews. In the interim, SV continues to move forward with the National Library of Israel and the National Library of Canada in cataloguing the collection through the generous support of Robert Mashaal.

A special message from the Chair of Sephardi Voices – Richard Stursberg

The Sephardi Voices Archive houses one of the largest collection of digital audio-visual interviews in the world. To date, over 450 interviews have been done, recording what life was like for Jews living in Arab lands, what happened to the individuals who had to flee, and what has become of them since. The collection contains not only the interviews but also family photographs, school report cards, passports, property deeds, identity cards, and souvenirs, a vast assemblage of materials from the world that was lost.

With the generous support of David Dangoor (London), the Archive will become the source for a new book called Sephardi Voices: Stories of the Arab Jews. The book recounts this largely forgotten exodus through the words of the people who lived through it. They describe their lives before the expulsions began, the terror they had to endure, and the ways in which they rebuilt in the countries that took them in. Their stories are stories of loss, but also stories of redemption.

The book includes many of their family photographs and portraits. There are rare and privileged glimpses into their schools, family gatherings, marriages, and celebrations. They appear as they were then – in Baghdad, Algiers, and Cairo – and as they are now.

Their story is told chronologically. It begins with the first Jew, Abraham, and moves forward through the vast reaches of Jewish history, focusing on the great events of the post-war period: the founding of the state of Israel and the War of Independence, the Suez Crisis, the Algerian War of Independence, the Six-Day War, the Yom Kippur War, and the Iranian Revolution.

These events are seen and heard through the voices of the displaced. There are wealthy bankers and businessmen from Baghdad, friends of the last King of Egypt, impoverished artisans from the Casbah in Algiers, mountain peasants from Morocco, intellectuals and Nobel Prize winners, schoolgirls in Yemen, daring smugglers and influential politicians.

There are witnesses to the pogroms in Libya and Egypt, the burning of the synagogues in Syria, the terrible Farhud in Iraq; there are passengers on the great airlifts of the Magic Carpet and Operation Ezra and Nehemiah; there are families escaping through the mountains of Kurdistan; there are fortunes rebuilt in London and Montreal; there are husbands smuggled into Teheran in search of wives; there are, in fact, the whole lost world and its redemption.

Sephardi Voices: Stories of the Arab Jews will be available in bookstores in the fall of 2021.

Israel, known as Start-Up Nation, has quickly become the Vaccination Nation, with the highest rate of COVID-19 vaccine deployment in the world. Our Sephardi Voices team has been unable to travel and meet in person—and so our interviews of Sephardi Jews from all over the world have been put on hold temporarily. But we are grateful that several key efforts to document the personal histories of the Jews of the Arab world have not been hindered.

One of them is a partnership with the National Library of Israel to house the Sephardi Voices collection in perpetuity. Although it has been closed to the public, the National Library has been hard at work in digitizing and publishing oral histories from the Sephardi Voices’ initiative—the world’s first large-scale digital collection that documents and preserves the life stories of Jews who lived in Arab and Islamic countries. The initiative is the result of an agreement with SV, and it will also include a dedicated landing page devoted to the SV project.

The joint project addresses “a very important subject that, after a long time, has started to become the focus of research, as well as growing public awareness,” said Dr. Yoel Finkelman, curator of the Judaica Collection in the National Library, in an interview in Israel Hayom newspaper. The SV collection at the National Library will include audio interviews, documents and transcripts, and photographs.

The Library, located in the Givat Ram campus of the Hebrew University of Jerusalem, contains more than five million books, and holds one of the world’s largest collections of Judaica. A new 34,000 square-foot building is scheduled for completion in 2021.

A joint event with the National Library to formally launch the SV collection will be planned for 2022.

My first real experience with anti-Semitism was in 1967 when the Six Day War broke out. It was the first time in my life that I felt my Jewish identity. It was in June. I was at school in second grade. It’s in the middle of the day and during recess in the morning. All of a sudden, a few Moroccan kids in my class, came at me, saying, “we’re going to kill you because you’re a Jew, you’re Zionist.” And we start to fight in the schoolyard. There’s no internet and little TV, but somehow these kids were conditioned by their families, to see me as other, a “Zionist” who deserved to be insulted, spat on and physically assaulted. Al lihoudi khanz – “dirty Jew”. I was 7 years old.

When I got home, I told my mom what happened and she told me, “keep a low profile.” That changed my life in a big way. It made me realize there would always be people reminding me that I was a Jew, and I was somehow a representative of Israel.

We knew when we were growing up that we would probably be the last generation living in Morocco. It was not a matter of where we will live, but when we will leave. There was a feeling of not being home, of always being kind of a second-class citizen. There was no real future for us in Morocco because we were Jewish.

My family’s roots in Morocco go back to 1492. But after centuries, and generations, we left. My sisters and parents moved to Israel. My eldest sister emigrated in 1971 after completing high school. It was a time of change and personal liberation. My parents were not comfortable having their 17-year-old daughter going to France where drugs and sexual freedom were the two main pillars of French universities. I left for Toulouse and university in 1978 at the age of eighteen. It was the golden age for Jews in France. I had never met an Ashkenazi Jew before. Some of them became very good friends of mine. They were close to Israel and proud of their Jewish identity, but I found them very French. Coming from a traditional Moroccan background, I was shocked when I saw a Jew eating ham in his home. Where I came from this was unheard of.

Over time, the mood started to change in France, and I started feeling the same thing that I felt in Morocco – this is not my place. Who is going to be on our side if anti-Semitism comes, and it will come with the growing Muslim population?

We lived in a bubble in Paris and had very good friends living in good neighborhoods. But our kids were going to grow up in this country, go to school, take the metro, go to clubs and confront open hostility. I didn’t want them to encounter what I had to face in Morocco.

A new and rampant anti-Semitism in France fueled mainly by a growing and vocal Muslim community was not going to stop. The time had come to pack up once again. So, in 2002, at age 42, my wife and I decided it was time to leave for the US with our three young children. Leaving seems to be a second nature for Sephardi Jews.

Interested in submitting a piece to a future newsletter?

Email our Director of Communications at mdevorahkahn@sephardivoices.com or click below!

Echoes of Purim and Passover: Stories from Egypt and Iran

The Forgotten Exodus – A Canadian Refuge

Portrait Exhibition at the National Library of Israel as part of the year of celebration for the opening of the new National Library in Jerusalem. This will also announce the deposit of the entire Sephardi Voices Collection into the Library.

November 15, 2020, From Baklava to Beavertails: The Syrian & Lebanese Jewish Experience in Canada 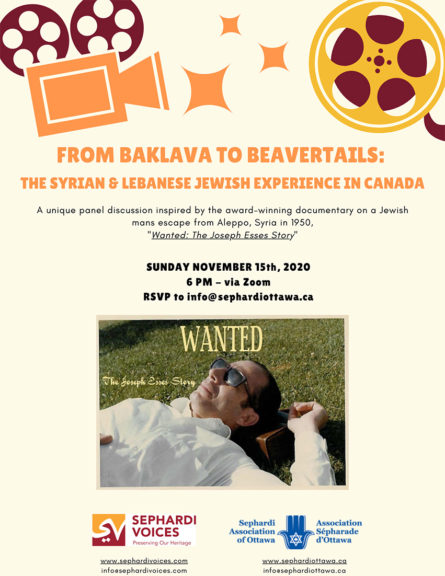 Spielberg and the Sephardi – Testimonies of Jewish Refugees from Islamic Lands 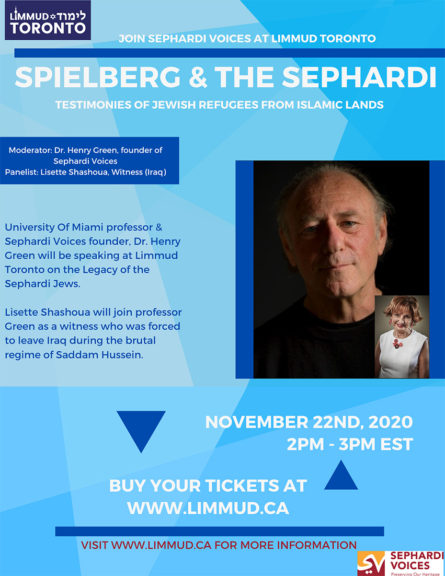 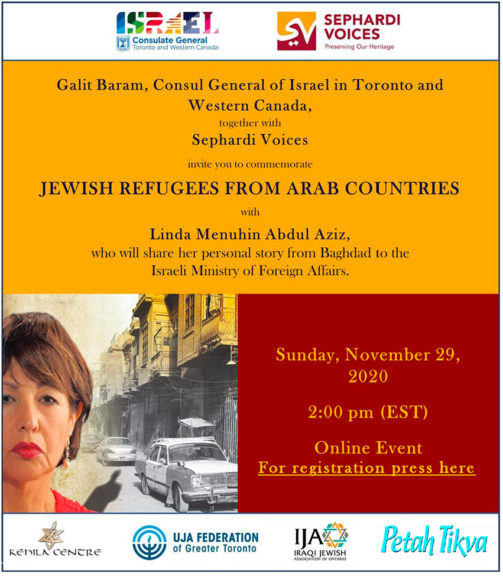 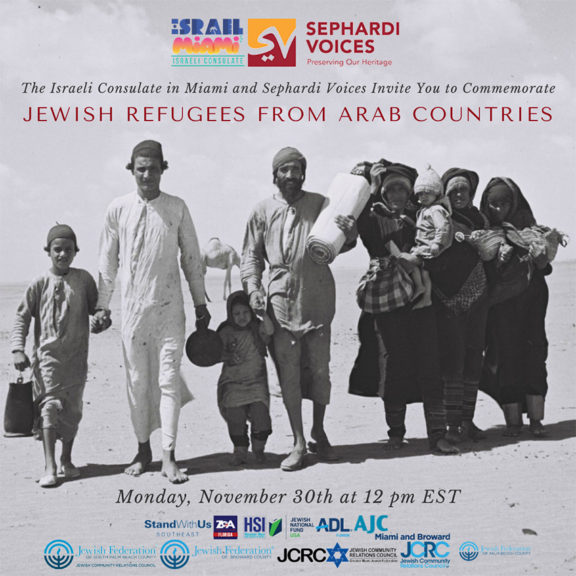 December 6, 2020, The Jewish Community from Egypt 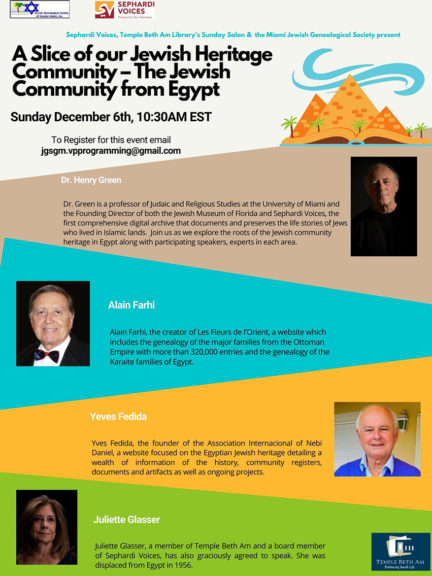 On the eve of Hanukah, Sephardi Voices and Temple Judea in Miami presented a Zoom conference with guest speakers, Jimmy Benaudis from Morocco, and Sephardi Voices research consultant and interviewer, Lisette Shashoua, who is an Iraqi refugee. 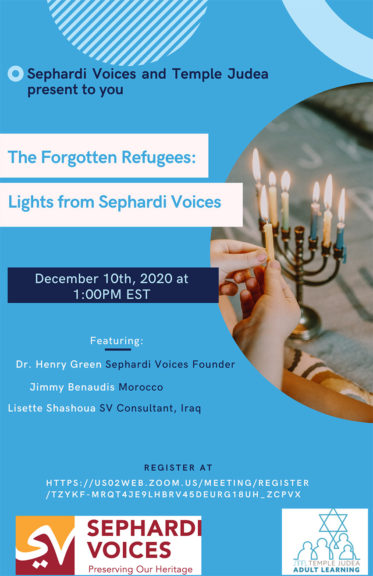 The stories, heritage and history of Jews who immigrated to Israel from Arab lands will be documented as part of a new national project. Sephardi Voices will be recognized in this incredible initiative. Please CLICK HERE to read the full article in Haaretz.

SEPTEMBER 2016: Richard Stursberg, former executive vice-president of CBC/Radio Canada, and now chair of the board of Sephardi Voices International, talks to The Canadian Jewish News about why he got involved in preserving the voices of the Sephardim. He speaks about how the expulsion of the Sephardim was both a catastrophe for the Jews, and a catastrophe for the Islamic countries involved. Read the complete interview in the September 8 Edition of the Canadian Jewish News. (You’ll find it on page 54.)

SEPTEMBER 12 2016: There was a big turnout for Sephardi Voices launch in Montreal last night. Thanks to everyone who attended. As you can see in the photo, Sephardi Voices chair Richard Stursberg addressed a rapt Montreal audience. More events to come over the next few days.

Part two of the Canadian launch will take place in Toronto September 19 to 23.

AUGUST 11, 2016: The Canadian Broadcasting Corporation’s Jill Dempsey interviews Sephardi Voices Founding Director Dr. Henry Green. Henry answers questions about the forgotten exodus of the Sephardi Jews, their diverse cultural heritage, and why he wants their voices to be heard. Henry also speaks of how his involvement with Sephardi Voices has changed his life and touched his soul.

LISTEN TO THE INTERVIEW

JANUARY 5, 2016: Sephardi Voices Executive Director, Henry Green, accompanies US Congresswoman Ileana Ros-Lehtinen on a tour of the Iraqi Jewish Archive in the Jewish Museum of Florida.

WATCH A VIDEO OF THE TOUR

JANUARY 26, 2014: Executive Director Henry Green introduces the oral legacy of Sephardi Voices to a rapt audience at the Jewish Museum of Florida.

WATCH A VIDEO OF THIS PRESENTATION